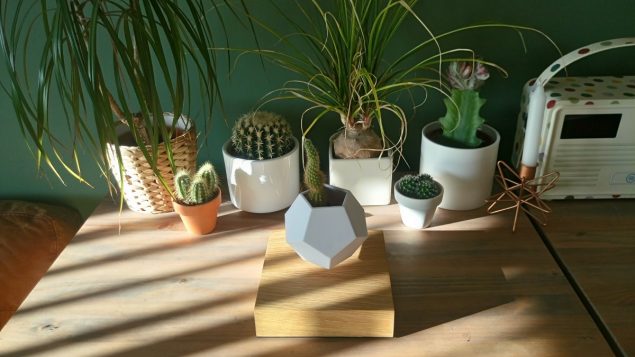 I am so excited to share today’s post with you guys as this is one of the coolest things in product and home design that I have ever seen. As soon as I heard about the LYFE levitating plant pot I was desperate to try it out so I was over the moon when NOXU Home agreed to let me review it here on the blog. For those of you who don’t know, NOXU Home is a retailer that specializes in designer furniture. They seek out the highest quality and most stylish pieces produced by the very best independent designers and design houses. Their international collection features pieces from the Netherlands, Italy, Romania, and many other European creative hubs. It is the perfect place to shop if you are looking for something for the design-lover in your life. And the LYFE levitating plant pot is just one of the amazing products that they stock.

At NOXU Home we believe that inspiration and innovation doesn’t just come from household names, our mission is to bring the stunning work of these designers into the lime-light, readily available to brighten up your home or office. 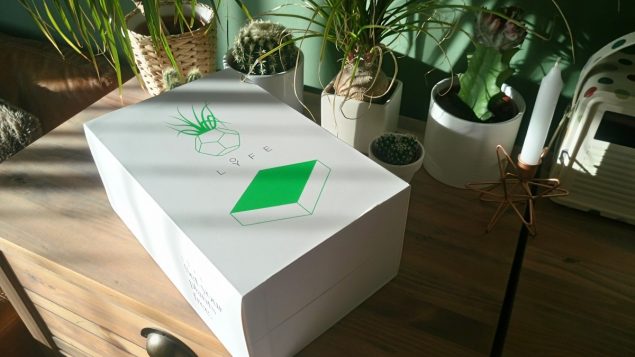 The LYFE levitating plant pot is designed by a small team of creatives, engineers, designers and artists who met in Sweden, and who go by the name of FLYTE. They currently only make two products: the LYFE levitating plant pot and the equally cool FLYTE levitating light bulb. I’m really excited to see what else they will come up with in the future so this is definitely a design house to watch. Incidentally, you may have seen these guys at Tent London if you were able to make it to the LONDON DESIGN FESTIVAL this year. 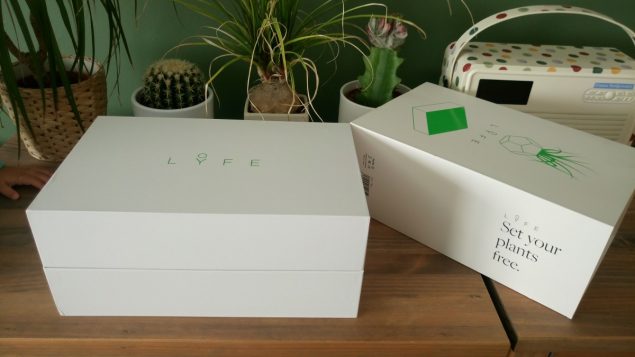 The packaging of the LYFE levitating plant pot is beautiful. It is really sturdy and good quality and gives a good indication of the quality of the product inside. I really like the text on the side of the box that says “LYFE Set your plants free” and this product certainly does allow you to do just that. I felt like a small child at Christmas while I was unboxing this product as I was full of anticipation knowing what a magical experience I was about to have. I know this sounds so ridiculously over the top but you will know exactly what I mean as you read on.

Inside the box is a really heavy, rectangular oak base and a beautiful 12-sided geodesic planter. When you take the base out of the box there is a power cable which comes with numerous adapters for the different plugs that will be required for use around the globe. The power cable is a beautiful golden woven cable with a little label on it that again gives this product a real sense of quality. As Charles Eames once famously said “The details are not the details. They make the design”. Never has a truer word been said! 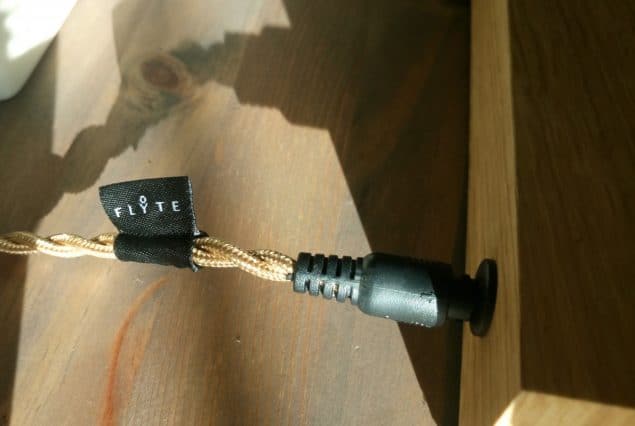 Once the base of the LYFE levitating planter is connected to the power, the magnet inside the base becomes a powerful force. If you put the plant pot anywhere near it, it will be strongly attracted to the base so do be careful. I was surprised by just how strong the magnetism was. The white planter has an outer shell that is molded from silicon, which makes it grippy and tactile. It also has a hidden little reservoir in the base of the planter to prevent over-watering as excess water can escape through the cleverly designed drainage system. 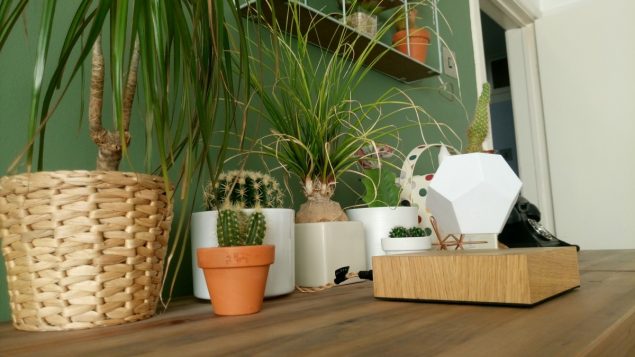 Once you have chosen your plant and potted it up you can see the zero-gravity system come to life using the Maglev technology that it has been designed around. This process is not as simple as you might think and it does require a few minutes of practice. When my husband first tried he couldn’t get it to levitate and the magnets would push the planter away in all different directions. However, once I had read the instructions (something men seem so reluctant to do!) we had a much clearer idea of what to do. It’s important to cradle the planter in both hands and gently lower it down centrally above the base. You soon feel the magnetic force lift the planter out of your hands and you can then release it and watch it levitate. 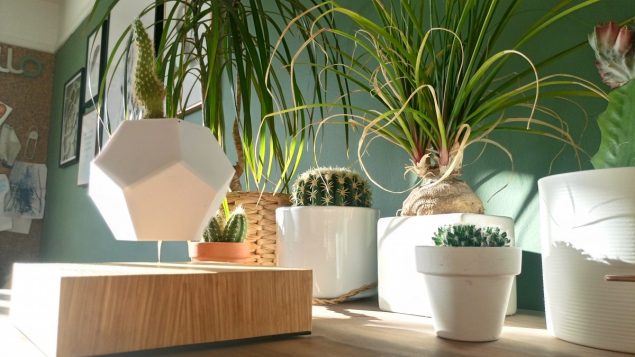 As if that isn’t amazing enough, the planter also rotates in mid-air during suspension. As the product was designed in Sweden where winters are long and dark, this feature ensures that all sides of the plant are exposed to sunlight. What a genius idea!! As the LYFE levitating plant pot rotates in mid-air you are able to see your plant from all different angles, and the geodesic form of the planter reflects several different shades of light as it gracefully spins around. The whole experience is actually quite hypnotic and mesmerizing. 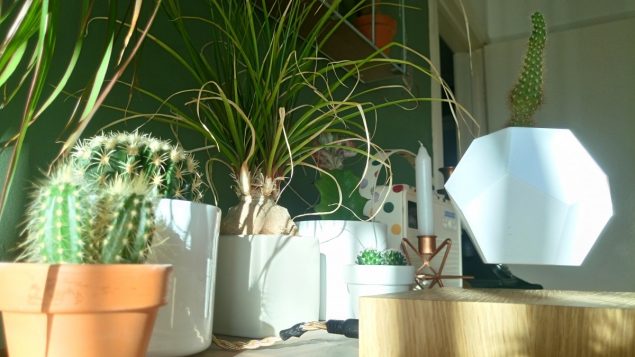 As I was testing the LYFE planter I didn’t really have any plants at home that were small enough to go into the pot. I unpotted this little cactus chappy just for the purpose of this post but I’ve decided to invest in an air plant. If you’ve never heard of air plants, they were identified by the Swedish botanist Carl Linnaeus and are plants that grow in the air. They thrive upon the circulation of airborne particles which are absorbed through their leaves. As they don’t have a conventional root system they have no need for soil. So the micro-climate created by this gravity-defying growing system is perfect for the cultivation of air plants.

Apparently, the magnetic field of the earth has been proven to have powerful effects on plants and studies have shown that magnetic fields accelerate the ripening of certain fruits, enhancing a plant’s metabolism. FLYTE has spent a considerable amount of time investigating the effects of magnetism on plants and who knows, maybe this magnetic levitation of plants will herald a new way of cultivating our plants in the future. Only time will tell I guess. 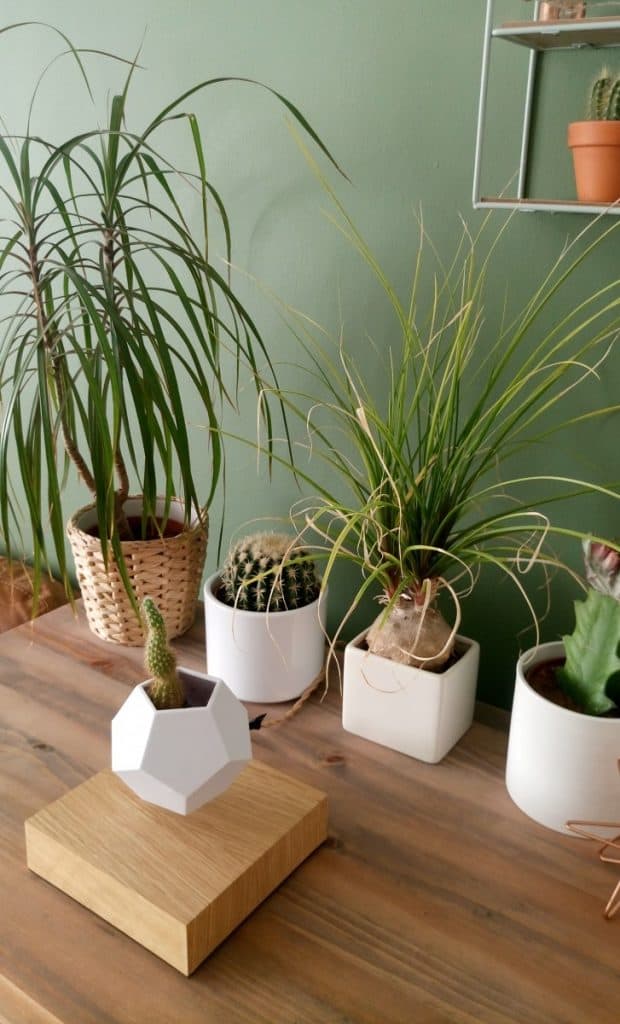 Our goal is to create intelligent and inspiring products with the absolute WOW factor. 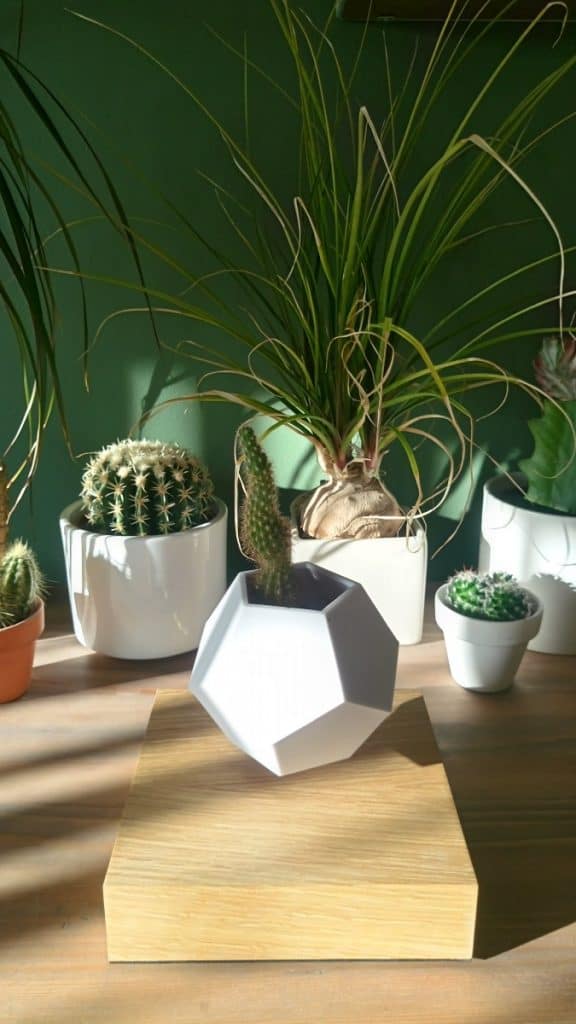 I absolutely love this product and I recommend it for any plant lovers out there who are looking for a new and unique way to display their green gang members. The LYFE levitating plant pot doesn’t come cheap mind, but with all the technology built into it, that is to be expected. So I doubt anyone simply looking for a plant pot would consider stretching their budget this far. But design lovers, plant lovers and people who want to create a statement in their home should definitely consider the LYFE planter. Its Nordic elegance and minimalism is understated, as we have come to expect from Scandinavian design, so whilst LYFE will be the talking point of any room it is found in, it is not an overpowering design statement that will upstage everything else in the room. 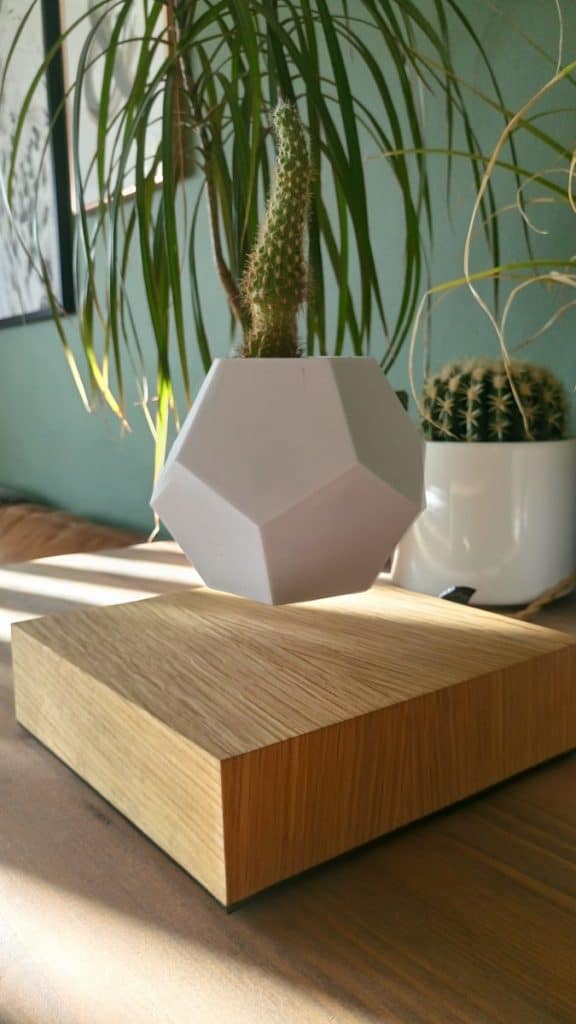 If I didn’t have two tiny toddlers running around at home, I would probably want to place this on my coffee table or sideboard to make sure that it took centre stage in the livingroom. However, tiny little sticky hands would be desperate to make a grab for it and I can just imagine the new game being who can knock the LYFE planter out of orbit. So for now, this little gem will be taking pride of place on a very high shelf up near the ceiling. But I’ll be sure to point it out to all my visitors. After all, it needs to be seen to be believed.

I did try to make a little video myself, but the kids kept getting in the way and once I’d finally captured it in action I realised that the sound track of Dora the Explora detracted somewhat from the marvel I was trying to show. What is it they say? Never work with kids or animals? So in the meantime here is a short film produced by FLYTE explaining all there is to know about the LYFE levitating plant pot.

Disclosure: This post has been written in collaboration with NOXU Home who supplied the LYFE levitating plant pot for the purpose of this review. However, I want to stress that I only collaborate with brands and companies that I genuinely like and believe that my readers will like too.

I still absolutely love the wallhangings by creati